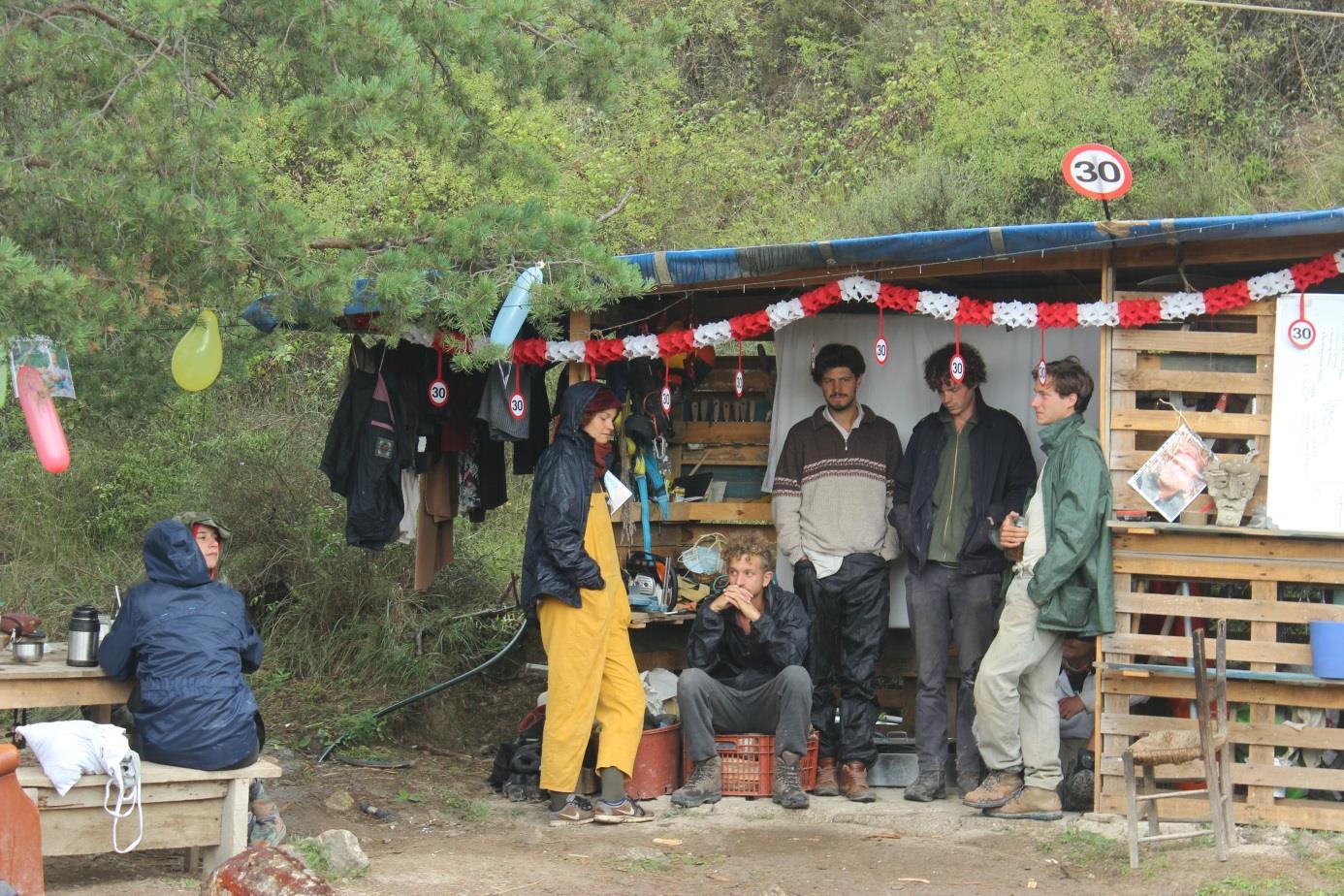 After three months of silence, here is a bit of news from Puyuelo once more.

As you might or might not know, we have spent the last months mainly working on the reconstruction of two ruins. James and me rebuilt Puyuelo‟s old iron shop, which is by now as good as finished. Felix and Moritz are working on a bigger project, and although they have not finished it yet, their progress is, to say the least, impressive. Underneath you see some before and after photos of both houses. In general, if you want to skip this nonsense and go straight to some photo material, move down!

After a generally busy summer, what we had come to call the invasion began halfway through September, a couple of days before Felix‟s 30 th birthday. Quite some friends visited us in those days, while others came by especially because of Felix. For something like a week we were more than a dozen people in Puyuelo, with a climactic peak of almost 30 on the night of the party itself. (special mentioning goes to the 3-headed, Austrian delegation of the Wolfskogel. Alina, Paul and Armin‟s visit felt like the confirmation of the young and yet to be defined liaison between our projects).

To me, what I feared to be an invasion indeed, turned out to be a great example of how self-government in a place like this can, when well executed, give birth to a small and smoothly-ran community, that exists only once for a couple of days in its particular constellation. I have lived in many of those while traveling. Some of which I remember as true gems; interesting melting pots of people that are briefly united in a social space defined only by the boundaries of nature surrounding it. Knowing that Puyuelo would soon be the calm, monastery-like village it is in winter, I enjoyed the last days of laughter, collective work, talking and dancing that came with Felix‟s birthday.

The last night before most people left, we sat down in a circle (as the good old Jetset hippies we are) and reflected on what the week had meant to every one of us. Each one of our friends formulated a different experience, both negatively and positively. The gift of hearing so many people reflect on our project, is that it momentarily dragged me out of my day to day assumptions of what Puyuelo is, and put a different light on my oh so human default setting that my experience equals reality.

More so, it pointed out how Puyuelo is now really becoming a village again; a place that is alive in the minds of people, that has a reference in the present, with stories and feelings attached to it. Not only have we now cleaned up and restored some houses, slowly we have been reconstructing a place that exists outside of the history books or the memories of people.

I remember how we ducktaped the words “Puyuelo Vive” (Puyuelo is alive) on the first cardboard-like door we invented to lock off our house two years ago. Back then Puyuelo was a shadow of itself; a curiosum only kept on some pueblos abandonados blogs; a couple of ruins sinking in a sea of vegetation. In hindsight, a less concrete and more prophetical message would have been more appropriate, something like “Puyuelo se despertó”, Puyuelo woke up. Because it has been only since we really live here that Puyuelo truly came alive, and that is far from only our work.

Notwithstanding the summer days of friendship and our material achievements, we ended the season with a general feeling of having not done as good as we could have done, or as we should, maybe, if we want this way of living to work out. It seems easy to be flooded by the normalities of everyday existence, and to lose out of sight that a somehow communal life in a place like ours comes with challenges that are hard to foresee. There was a lot to be talked about, improvements to be made in our communication and our day to day organization. Nothing insuperable fortunately, but just the normal challenges that come with attuning four different minds working so intensely on the same project.

Yet as Greta Thunberg said in Glasgow, the world will not change by BLABLABLA only. After a period of intense talking, marinated in the occasional waves of autumn blues, we decided to end this year on a lighter note. Just before Felix set sail to Italy to see the Vatican without Japanese once more, we left on a somehow grotesque weekend (compared to Puyuelo‟s usual standards).

For three nights, we rented an Airbnb apartment in the tiny French town of Jussey; our first common holiday since a long time and the last days of Western luxury before winter begins. Among the general indulgence, I observed a staggering record of 8 full washing machines, Felix heating his socks in the microwave and about a terabyte of downloading on the house Wifi.

Grotesque weekends ought to be ended in a grotesque manner. We decided to reap society‟s fruits for a last time, and took our hot-showered-asses to snack Mesud; Jussey‟s neon-lit Kebab place that had been catching our attention since a couple of days now. Mesud, pater familias of the snackbar, sat in a corner of the restaurant, leisurely scrolling on his smartphone, one arm resting on his impressive pot belly (which I could only interpret as good advertisement for his cuisine).

Mesud greeted me formally and gestured towards his teenage sons to take my order. The oldest boy‟s courtesy was spotless, he mastered the snackbar lexicon like a Döner veteran, and as I unsuspectingly walked out to wait with the others, I fantasized of the Durum/Falafel feast we were about to have.

But alas, from the other side of the street we saw how the boys, too young to order a beer in a bar, started slicing the tree-trunk sized piece of compressed cow-meat so emblematic of those établissements. Moreover, they proceeded to aim the meat in what looked more like a piece of bread than a durum. Since the snackbar and by extension, the entire main street of Jussey) was completely abandoned, fear rose among our midst that my undeniably spotless French might have been misinterpreted by Mesud‟s young Kebab boys.

Back inside, I asked them whether they had really prepared four durums with falafel. The boys stared at me in pubertal confusion, reassuring me repeatedly that „three of them contain mayonnaise and one not (as you asked us, sir)‟. I quickly glanced at Mesud, who wasn‟t paying the least bit of attention to our transaction. If he‟d find out about the total mess-up his child soldiers created, whether it was their fault or mine, they would surely get into trouble. No, I would keep this to myself, and we would eat whatever we had gotten.

And thus we ended up back in our IKEA-decorated Airbnb flat, eating our first real Döner Kebab in a decade on a kitsch table cloth covered with scraps of iron paper and fries. A dinner that looked as little Puyuelian as a wedding party at the Trump Tower. The only way we could possibly frame it was as a small and indirect revenge on the cows, whom, we‟d found out later, had in our absence wreaked havoc on one of our vegetable gardens. (and just a couple of days ago trampled the main water pipe to the house, which involved a lot of 7 pm chaos and a short fight with a hose leaking like hell).

The great thing about coming home after such a weekend, is that it is so clear again that no hot-shower nor automatic vacuum cleaner beats what we have here on our little hill. Today it is Moritz, James, I, and the occasional short term visitor that are left in Puyuelo. The autumn was sunny, colorful and silent, yet it has given way now to the first winter days. Outside lays a layer of unconvincing snow, of the kind that is in reality more an icy soup than real, arctic worthy snow. And so we have retreated inside, spending our time on organizing the past months as good as possible, diving into the creativity that has free play again, now that we have much more time on our hands than in summer.

This year we have worked very, very hard on this village, and our bodies and minds ache (literally in some cases) to enjoy it in a seasonally appropriate way over the next months. Back to reading, writing, inside work and watching the snow from behind a window. Think of us once in a while when you take a hot shower or walk in the snow. Next spring, we will be back bigger, better and bolder. Or at least we‟ll give our absolute best!