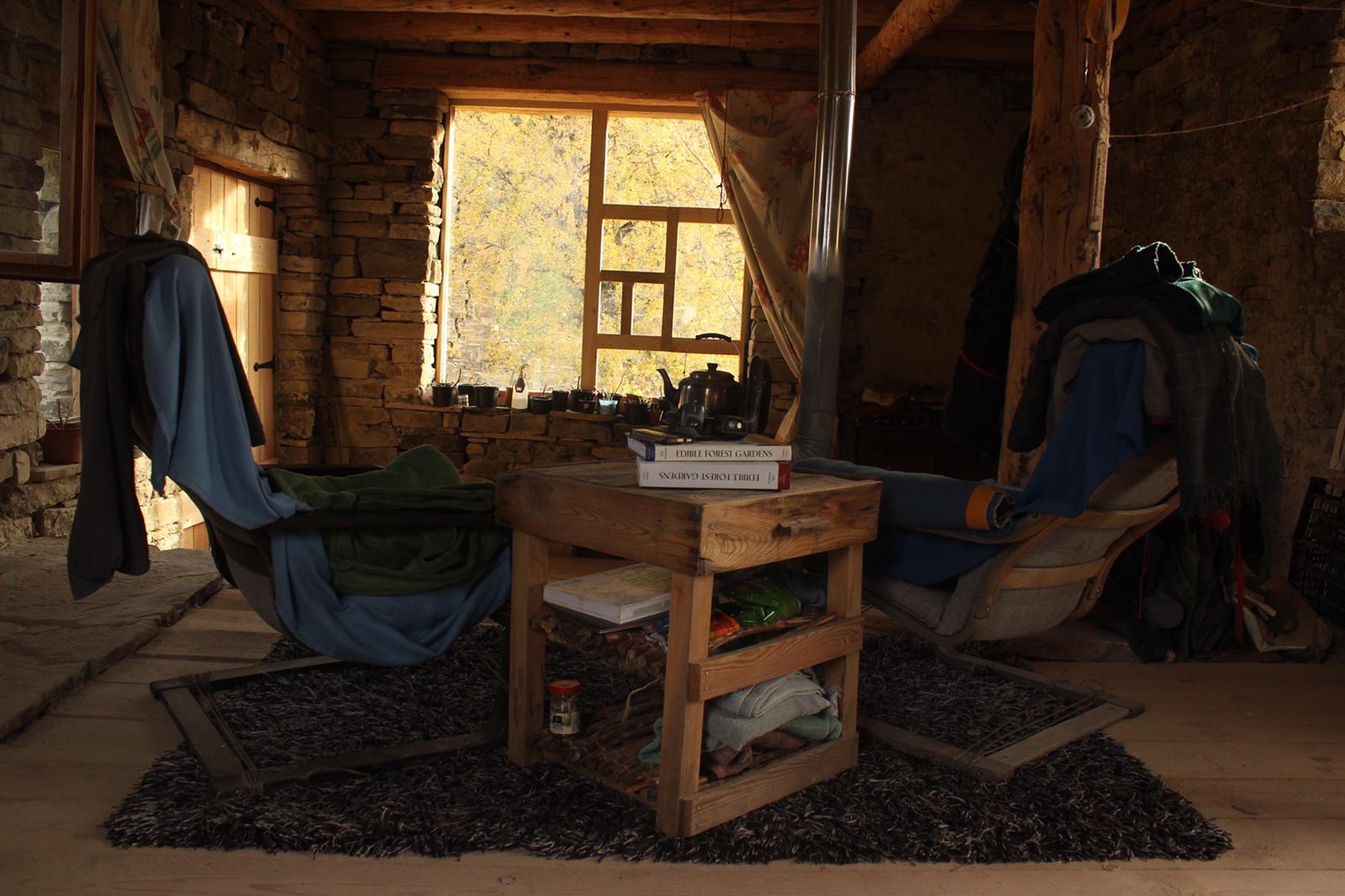 the gap between our News Letters seems to be longer every time. So long, that in some of you the thought might have popped up once or twice: what happened to Puyuelo? Did they manage to bring summer to a good end? Are they still alive?

The other day I found an interesting thought in Anna Tsing’s ‘Mushroom at the end of the world”. According to Tsing, our thinking is so drenched in beliefs of progress and development, that we are only willing to see that part of the present that leads to a real or imagined future. Musing on the state of our world she says: “I’ll admit it’s hard for me to even say this: there might not be a collective happy ending. Then why bother getting up in the morning?”. A question I have posed myself many times, revealed to be once again infected by exactly those forms of thinking that have led us into crisis. Are there other reasons than the absence or presence of a “credible” future for doing what we believe to be the right thing? Do we really need to see light at the end of the tunnel to choose life? Why do we always evaluate things primarily as to how they end, instead of as to how they are?

The same applies to Puyuelo. A story thus far clearly framed by progress. The beginning? Ruins and tents. The present? Fancy stoves and desks behind double-glass windows overlooking the valley. The future? The smell of spring and hopes of even more thrilling times. However, this season I have seen how being caught up in such a progressive story holds you back from seeing what is actually there. James and me had a blast on our construction site, yet again I got so involved that my existence bordered on obsession. For months all of us were working like madmen, towards winter, preparing yet another shelter for our next Pyrenean hibernation. I got so entangled that my vegetable garden withered away, my bees died and all other things I like disappeared out of sight. Fortunately, now solidly on the doorstep of the third winter in Puyuelo, this all comes with the confidence that this is the structure of the year. Once more the cold months have arrived; the heavy rains of autumn; the forest’s last gift in the shape of hundreds of delicious mushrooms; and that wonderfully uninviting weather that tells us it’s okay to stay inside and explore some more diverse aspects of our existence.

Well. Enough musing for now. Ever since James and Moritz parodied my News Letter so wonderfully on my 30rd birthday celebration, I can only hear myself in James’ ironic tone anyway. Here is a brief overview of what has happened this summer and autumn.

On the 18th of August we decided to speed things up a bit. It all started with a joke. Last spring one of us proposed to bring up the planks we needed for both planned roofs by helicopter. Curious how much that could cost us, we decided to call a cargo service nearby. They told us that official flight time was around thirty Euros per minute, yet that it was especially the journey back and forth to the pickup point that would be very expensive. The pilot said our job could be done in about ten minutes, and that he’d let us know if somebody needed his services for something more serious in our area. In that way we could pay him only our own ten minutes. The rest would be covered by his main client. Thus it happened that one summer morning everybody who was in the village set off to San Martin where 2 tons of planks were delivered. We arrived, had breakfast in the morning fog, unloaded the truck and prepared two solid packages. Some of us returned to indicate the landing spot. Moritz and me stayed behind, and although the pilot told me he would call me in advance, we suddenly saw a helicopter coming over the Nabain. We jumped out of the van and waved. Everything that followed you know from Hollywood. As the helicopter landed, it created so much wind and noise that it seemed to be storming. Two passengers and the copilot jumped out. They bent over not to be hit by the mechanical blades, shook our hands and asked for instructions. In less than a minute the first package went up as if the helicopter only lifted a box of matches. During the second flight the copilot told me we owed them 200 Euros. The helicopter circled around Puyuelo for a while, returned to the pickup spot, and as it flew off I checked my watch and realized only 11 minutes went by. 11 minutes that saved us something like two weeks of work and an extra hernia per person. Back home we opened a bottle of Cava and declared the rest of the day a holiday.

Somewhere mid-October we turned a one-time thing into a tradition, when just like last year the four of us left Puyuelo behind for an end of the season weekend. Just as many people visiting us talk about disconnecting from their busy, human-filled lives, we sometimes need to ‘disconnect’ from our busy, nature-dominated lives. Or maybe ‘connect’ might be a better expression, since our destination this year was Roses, one of the Costa Brava’s prime holiday destinations for hordes of German and Dutch Homo Touristicae, by this time of the year well over 65 years old. Roses has it all. A template climate denying the European autumn, the mirror-like undisturbedness of the Mediterranean sea, bars that offer Spetci and Schnitzl and Moules Frites, lavish shopping streets and mechanically harked beaches (one could feel how the sand was somehow tired, hard and moist after another summer of being heavily bombarded by sunblock and human fluids). What Roses unfortunately also reminded us of was the mischievousness of consumption. The consumer’s void: the instant where you realize that ice cream or dinner or seventh Tinto de Verano in a row does not lift the burden of existence, and all that stares you in the eye is the same emptiness you tried to cover up before. The emptiness of Neon-lit sneaker stores, of silent old obese couples in an all you can eat restaurant or of the 24/7 bullshit 90% of Television channels blast into the ether. One evening we had the television turned on in our Airbnb (as I said, also for us ‘disconnection’ from our daily existence feels somehow nourishing). “When I think I don’t live”, said a tanned Spanish Beach Boy on Temptation Island. A statement that ping-pongs between something like profound Budhism and the exact root of the eerie void that underlies a commercial place like Roses. “A sign of wisdom when rooted in years of meditation and work”, said Moritz. “In this case, however, mostly of utter imbecility”.

Back home in Puyuelo, some last weeks of hard work brought us to a long awaited ending. Both the Garden House and Sacha Huasi were by the end of November finished, that is to say, winter proof. And thus suddenly our narrow center, central stage of our lives for two years, stretched open, and turned Puyuelo into a village that is (at least when it comes to inhabited surface) bigger than it has ever been before. There is a six minutes climb from my house to Felix’s house. Some days in November I barely met Moritz and Aly before we had dinner in the evening. One thing is certain. We are on the doorstep of a very new experience, one of much more privacy and space, yet also one with new and different challenges. How do you organize a village where no private property exists? To what extent do we keep on working together on building out this place into a resilient micro-society? Which direction do we want to move in once we all have our own houses? We have four autumns, three winters, two springs and three summers of experience in Puyuelo to look back on. Next year two more of us turn thirty [You are hereby invited to the parties: James (10/04), Moritz (05/06)], there is the last house to finish and a lot more things to be improved.]

Yet this winter everyday is Monday and Sunday simultaneously, and we will try to live a present unconscious of anything that even smells like future.

From Puyuelo we wish you a refreshing winter,
A big hug from the mountains,