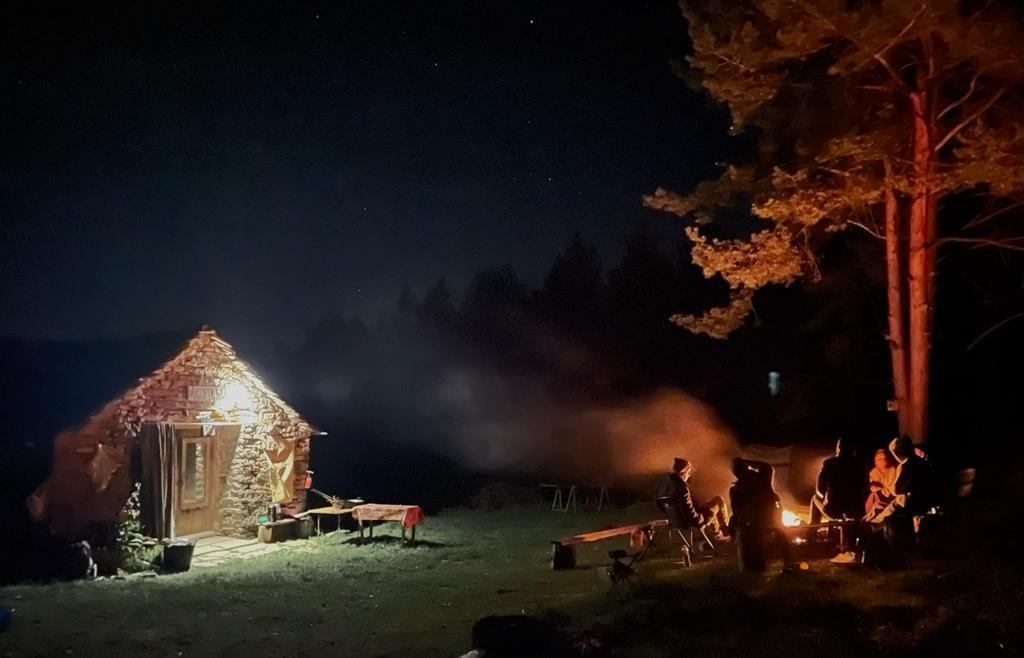 I believe it took a while since the last News Letter came, because as those of you who’ve been here
know, time follows different laws in Puyuelo. It moves in the shadows, plays tricks on you, going at
once immensely fast and incredibly slow. We measure it in seasons, the leaves that turn yellow,
disappear and come back in spring, and sometimes we open our eyes and realize half a year flew by
and we did not really notice.

The longer we live here, the more the rest of the world feels far away, strange. Every time I pass
through Barcelona, there is a wonderful sense of excitement that of course all of this still exists as
well. Back in the days in university I learned about the concept of phantasmagoria, the wonder of man
when faced with the marvels of modern technology; a fierce train or a dazzling skyscraper. By now I
have understood what that feeling actually means.

When we arrived here there was Covid, now it is war. Somehow we’d like to shout out that not so
much is needed for a life of quality (not quantity), although that might be naïve and blind for how
privileged we are.

2022 is the year of Truth for Puyuelo. This autumn we will celebrate the third year since we have
found the village, and the second since we live here, and if all goes well (don’t sell the bear’s skin
before it’s shot, they said, and then did it straight away) we might have four roofs by autumn.
Spring started rather bumpy for all of us. Personally I lost my grandfather Mat, whom I was very close
with. Not even a year ago he actually visited me here in Puyuelo and little could I expect that evening
on the hotel terrace would be one of the last evenings we would share. In June my grandmother,
father, uncle and aunt will visit us to spread his ashes in the mountains, as his only last wish was “not
to be left under a stone”.

When I returned to Puyuelo I found my companions in turbulent waters as well. In the beginning of
this project, the world seemed crazy enough with the pandemic. By now, only two years later, that
time feels like an innocent “we’re all in this together’ (hihi-haha) problem” compared to what is going
on now. I do not want to downplay what happened before. Many people around the world suffered and
died from Covid, but at least we in the West, especially those who barely are in contact with the
medical world, generally made it through pretty well. In Puyuelo we just sat on our hill, overlooking
the whole spectacle, only once in a while pulling an old and greasy mask out of the depths of our car
doors or buying 500 kilos of beans in the occasional fit of lockdown-is-coming-paranoia. This spring
things felt different. When we now look at the world we see war very close by again, and hear many
“adult”, “responsible”, “smart” politicians doing nothing than throwing oil on the fire. And so the
world crept into our paradise, unfortunately giving us only self-confirmation. Yes, it screams, it might
be a good idea to learn how to supply yourself with food, energy and water. Shit, it also screams, it is
scary to see how brute of a force humanity is and how stubborn we are when it comes to learning from
the past. The war broke out three days before my grandfather died. We all decided not to tell him
anyway.

For now, fortunately, we can willfully choose to avert our eyes a little bit longer and continue one
more season on the blind, bull-like manner we have used to govern this project so far. No major
changes until there is four roofs in Puyuelo, we said in the beginning, and although there is still
semantics, morals and pragmatics to sort out about what that than exactly means and who gets what and where do we which … they are also very realistically within reach as we work on two construction
sites again this summer. This time there is, to all of you faithful followers familiar, still the Garbe
House up the hill. An ongoing saga Felix and Moritz threw themselves on like hungry wolves a couple
of days ago.

Above that there is the newly baptized ‘Sacha Huasi’, or ‘House of the Forest’ (in Quechua), formerly
known as ‘The Deposit’. An old water container I want to turn into a two-story house, or at least into
something more worthy of the name Sacha Huasi than ‘Deposit’.

Something that tells you you have been living somewhere for quite a while is that the list of lost and
past things grows longer and longer. Everybody who has been here knew our dear friend Lasso.
Patriarch of the cat family, notorious chiller, invader of top class hotel rooms, travel companion
through good and bad; our asthmatic, hairy, spiritual master of taking life as relaxed as it is when
somebody feeds you twice a day. Well, if you know who I am talking about, you also know he had the
eerie, dog-like habit of following people. Somewhere in March two hikers passed through on their
way North, and we are afraid Lasso decided it was time for his last stunt. Ever since we have not seen
a trace of our friend, and multiple expeditions towards the distant village of Yeba (in which direction
we assume he ventured) have unfortunately not brought him back.

The results of the loss became clear soon enough. As Lasso departed, the fauna in the village had to
reorganize itself and Herzogian scenes of natural Horror erupted. The house I now live in is territory
of Ara, and since Lasso was the only cat who dared to venture in there regularly, an army of mice
decided to march in immediately (life in the woods), resulting in a gruesome 6 am sighting the other
day of a mouse in my last plastic bag of muesli (and the ensuing 7 am dilemma of will I still eat this or
not?). Luckily this is the 21 st century, and I now bombard them regularly with a 9 hour Youtube mix of
ultrasonic vermin repellent sounds. Buen provecho little muesli-stealing creeps!

Somewhere in March there was the premiere of the short documentary shot about Puyuelo last year.
Sara managed to be programmed on the Ethnographic Film Festival Espiello in Boltana (an incredibly
cosmopolitan event for a village just over 1000 inhabitants). We dressed up neatly, parked our
countryside car (by now it is so full of hay and other shady countryside things that it looks more like a
chicken coop on wheels) a good solid three blocks away from the cinema, and walked up all
sunglassed and shiny. I can tell you one thing, we looked more like the reservoir dogs poster than like
the new-rural-romantic image that was painted of us in that movie. (Sometimes people from the hotel
walk over to Puyuelo, all dressed up like Spanish Stanleys and Livingstones, searching for the natives
in their caves. You should see their puzzled expressions when they realize we wear clothes and sit on
chairs). If you want even more Puyuelo after this letter, you find the documentary here. Do
take it with a grain of salt, things always look a little better on camera, even I do so it seems.

Unfortunately we had to do without our dear friend James this spring. That meant a drop in the
village’s average food rates, a rise in average jokes and a steady increase of our mayonnaise
consumption. After nearly three months of his absence that means by now we eat old bread with
mayonnaise and do nothing but laughing. Luckily we had Aly to make up for James’s absence. Half as
much beard, but at least the same amount of muscle. By now honestly none of us still works like Aly,
whom we sometimes even warmly, full of love have to remind not to work on a fucking Sunday, Aly,
when we do very hard efforts to work on intellectual matters in our hammocks, thank you Aly.
What more can I say? This is spring. It’s green, all in your face, sometimes confusing in existential ways, but then there is the golden hour (somewhere between 7 and 9 pm for those who haven’t been
here) that on an unexpected moment unfolds before you; and all is right, all is peaceful, all is alive and
bristling with potential, and that whole wicked world out there just crumbles away and disappears out
of sight. Isn’t that partially why we like it so much here?

We wish you a spring full of beginnings,
Pablo, Moritz, Felix, Aly and James (on vacation)
Puyuelo, 12th of May, 2022.