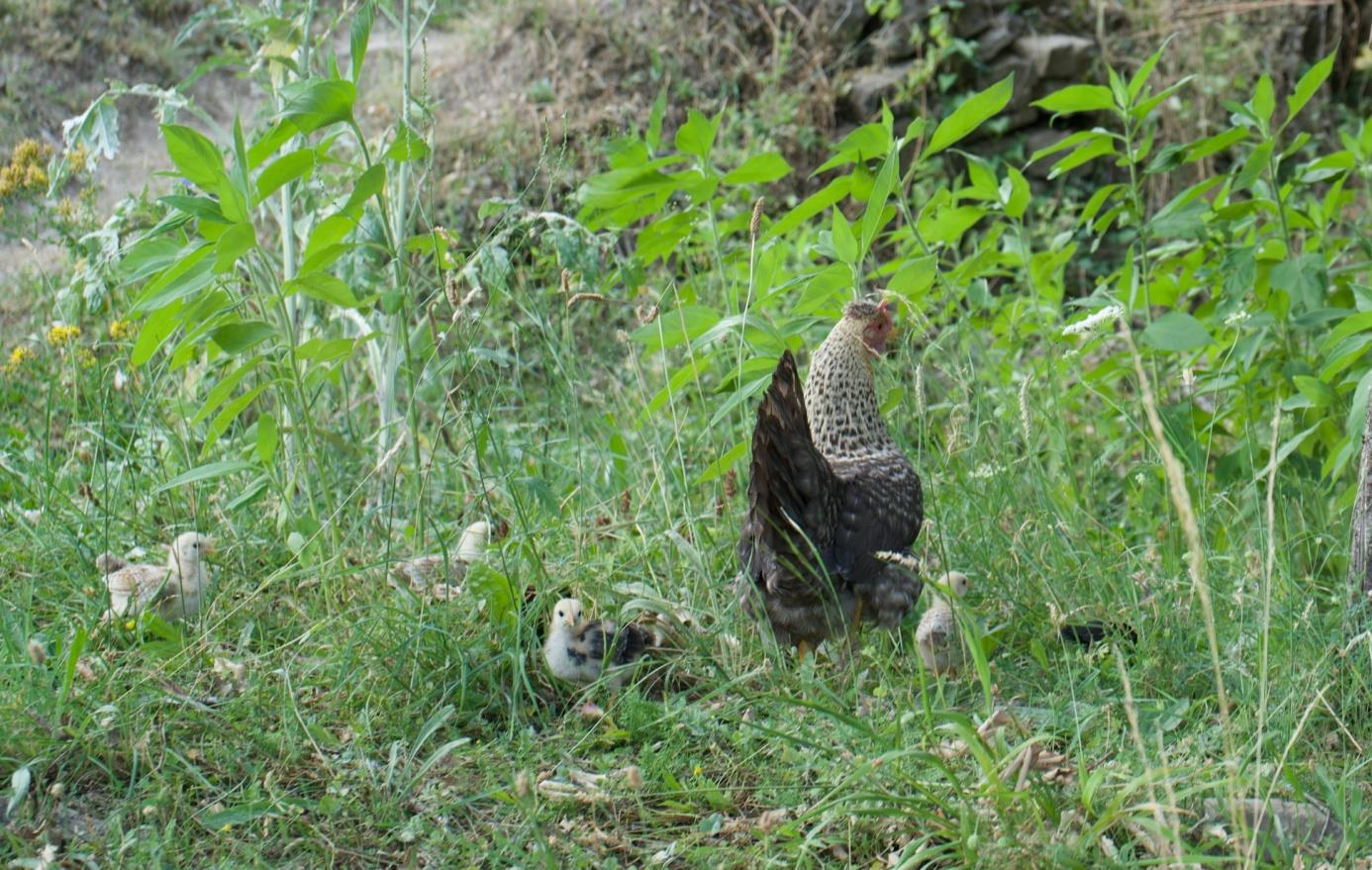 first of all, I hope each and all of you are doing as well as possible or wanted, especially our friends in
Ghent who might be suffering from the Ghent Festival. Here is some news from Puyuelo to cheer you
up in those long afternoons of post-party melancholia. Let me start with the story of a peculiar visitor.
Even before we discovered Puyuelo, I liked the idea of being hidden yet not fully cut off from the rest
of the world. There is a lot of illusion a road, track or river brings. The possibility that something will
happen, that a wanderer might break the day and bring stories or other gifts from distant lands. On the
first of July the unknown fell from the sky around 6 pm, at the hottest moment of the day, this time in
the guise of Francois, a 67 year old hiker who had left his home in the French Loire three months ago,
to walk along the Greenwich Meridian from England to the Mediterranean coast.

Francois allowed himself to divert from the meridian only 1 degree in each direction, which equals
about 1,2 kilometer in distance. Part of his itinerary was mapped out, yet he also had to fight with
quite some vegetation. ‘On average I sometimes get to 1 or 2 kilometer per hour’, he smiled. None of
us was surprised that his wife preferred staying at home while Francois was on one of his crazy
adventures. It did not take long for Aly and me to offer the curious traveler to set up camp in Puyuelo
for the night, eager as both of us are to honor all the wonderful people that hosted us when we were
on the road.

“Listen, Francois”, I said. “You have just bumped into the one and only Eco-Village on the Greenwich
Meridian”.
Francois’ face turned almost green as he grabbed for his necklaced Garmin GPS. I noticed his hand
was slightly shaking.
“Ehm”, he stammered, clearly maintaining his French good manners. “Quatcentcinquante metres pour
etre precise. Vous etes pas vraiment dessus¹”.
I laughed out loud. What a joy to see my joke explode against the nonnegotiable reason of the
passionate traveler. During this particular journey, the Greenwich line was holy for Francois, his
thread of Ariadne out of the labyrinth of existence, that god damned imaginary line he had been
clinging to for the past three months, around which he had spun this whole adventure. Just him, the
Garmin GPS, a pair of good shoes and a tent. And the line is the line. Puyuelo is at 42.48733 Lat. And
0.005384 Lang. Not even half a degree too much to the East to be on the Meridian.
“We should have told him to set up his tent on his bloody line”, Aly joked at me behind Francois’
back.
“Well”, I added. “Let us be the only Eco-Village at 0.005384 degrees away from the Greenwich
Meridian”.
“I don’t feel the ideas of Buddhism inside my own experience”, said Francois when I asked him about
Peter Mathiessen’s snow leopard (a travel logue about the search of the mythical snow leopard in the
Himalayas). “And I think Sylvain Tesson is a bore. But it is a very good idea to spin a story around the
open-ended search of a mythical creature”.

For Francois, that mythical creature took the shape of The Greenwich Meridian. The epitome of
straightness through the savage unstraightness of the natural world, silently bulldozering through
canyons and forests and rivers, crossing thousands of just as fictional human lines and borders. Yet
now, two weeks away from his destination, it wasn’t Mathiessen’s cold nor Tesson’s hardships that
seemed to trouble Francois. It was his spouse waiting for him at home.
Francois’ partner wanted him to come back home for summer, and though his eyes betrayed that not
reaching the Mediterranean coast now would be something like a horrible defeat, it also felt like he
had accepted there wasn’t a way around breaking the journey here, to then possibly continue two or
three more weeks in autumn.
“A pity”, he sighed, “As I am enjoying the walk and I am feeling well”
“Autumn is a wonderful season here though”, I half heartedly tried to comfort him. He smiled. “Well
yes, that sounds like a good argument in favor”.
I felt grateful when I went to bed. Grateful that the day brought us a gift, that the track for once
delivered us this kind of traveler, of a different breed than the day tourist (who wouldn’t accept our
invitation, caught up as he usually is in plans and schedules). Grateful that I was reminded of the
possibility to embark any day on the pursuit of a snow leopard, even when it leads us through the
thickest foliage. If there is one Buddhist inspired lesson books like the Snow Leopard play out, it is
that the interesting part is not the destination but the road. How much clearer can that be made when
the whole endeavor is so clearly futile, so utterly spun around an ephemeral idea like the Greenwich
Meridian? This is how I love to travel as well. Choosing nothing but a spine and then allow the bones
to take shape around them along the laws of the unknown.
And to bring back this letter to Puyuelo, I guess we all agree the past two years have shown us the
same lesson. We had our Greenwich Meridian; the idea of building up four houses, yet many times as
I work on my house I realize I actually enjoy it so much that the idea of being finished slightly
frightens me. What if it isn’t what I had in mind? Isn’t the road towards it already so fulfilling that
little more is needed? Well good that we still have the track passing through Puyuelo, and that any day
we can either pack our bags or see somebody arriving.

At the end of Spring we learned some though lessons about countryside life, where death is usually as
present as life itself. On the one hand the chicken population exploded. Over the course of four weeks,
we went from 5 to something like 30 chickens, bringing up doubts if it is still the chickens living in a
human village, or us living in a huge chicken coop. On the other hand one of our cats sadly died from
the complications following her sterilization, and one evening in May the village got hit by an
immense hail storm, resulting in a saddening and substantial damage in our vegetable gardens. It felt
like a big blow to all of us, and as the village smelled a couple of days like the fermenting oak leaves
that were scattered everywhere, we could only ponder life and its inherent fragility.

The past month of July our German axis fell away as both of the Garbe brothers (wisely) decided to
flee the heat and spend a month of holiday abroad. In Puyuelo remained the Belgian-French spine of
this project, James, Aly and I, who all returned to our secret language, so close yet at the same time so
far from the suave Spanish. To all you climate change deniers out there (little of whom will get their
hands on this letter I guess); screw you! After the hottest month of May ever, the hottest days of June
since 1950, July burst open with volcanic vehemence, and we saw ourselves at the mercy of
inescapably hot afternoons, as the temperature ping ponged between 25 (am) and 40 (pm) degrees
Celsius. Life during the day turned into a fluid existence as any source of water became the only
possible comfort, and we drifted from the river to the construction site to the river and then finally into
the semi-comfort of the temperate night. At the same time, the South of Europe suffered (and suffers)
under one after the other forest fire, a topic hard to ignore when you live among the pine trees and
haven’t seen a drop of rain in weeks.

During the first days of the pandemic, I could grasp vividly how things will feel like when a cosmic
force such as a virus or climate change really turns against us. Before I lost that feeling again behind
the numbing drums of banality and relative privilege, I remember it felt frightening, humbling,
grandiose. Somehow it feels inevitable by now, although still more on a rational than experiential
level. What will we still see as global warming increasingly slips into global weirding (dixit Felix)? Is
Aly right when she calls Puyuelo her ‘last dance with nature as we know it’? Does it make sense to
harm ourselves against droughts, overpopulation, forest fires and plagues? Is it apocalypse that awaits
us, or will it be more like a rebirth into something stronger and more beautiful?

All I can tell you is that there is still hope and joy in Puyuelo. We again have seen wonderful people
coming and going, each contributing their little piece to the puzzle. Special thanks goes to Charlie, our
second workawayer who stayed for a full month, and enriched our lives with his cultural nerdiness and
his extensive English vocabulary. Thank you Charlie, you are the most measly roadman we have ever
nackered in this Jetset hippie town. We are looking forward to take the tube all the way North to end-
of-the-line-high-Barnett one day and meet all your wicked batiboys. A sad goodbye always entails the
promise of the next meeting!

So, so. Just like Francois, we hold on to the lines we believe in, and refuse for now to be stopped by
any obstacle that confronts us. ‘The line is the line’, and as summer is halfway we seem to be on
schedule to have four houses in Puyuelo by the time the trees turn yellow. There will be time enough
to think when we finally all have our own stove in winter.

¹ “Ehmmm. Four hundred and fifty meters to be precise. You are not really on it”.

Here is a bunch of pictures, taken by Natalia