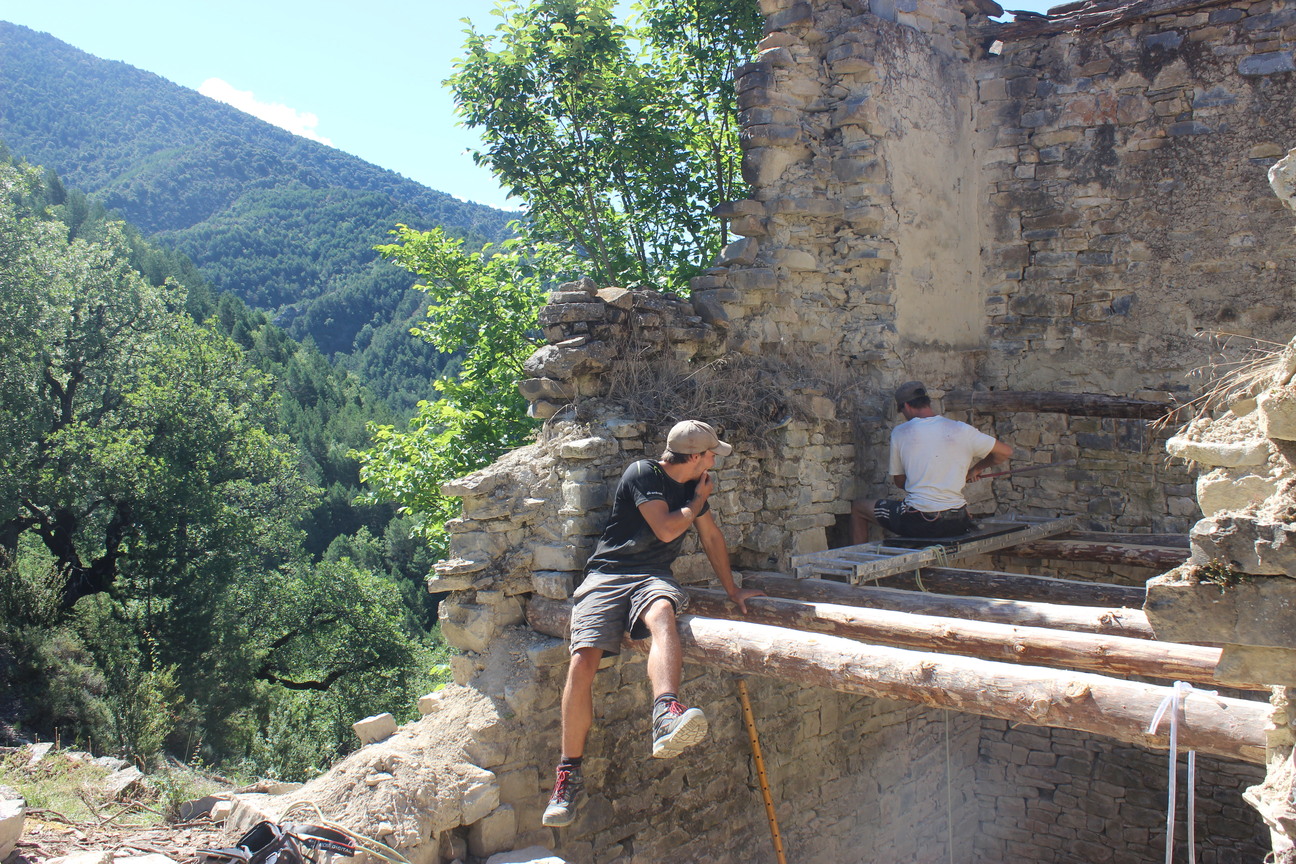 As much as winter is a time to rest and recover, summer is a battlefield; a people-filled, hot and busy blot on the calendar that stretches out roughly from mid-June to the end of September. That means we are somewhere “nearing” the end, on a Sunday island facing what we have come to call the Fritz- week1 ; the first week of rain announcing autumn.

1 In honor of Fritz, poor friend of Felix who picked exactly this week to visit us last year, bringing nothing but the inside of a coughin-sized tent. He arrived with a towel and a bottle of sunblock and left with a nascent pneumonia.

Whoever visited us so far knows that we tend to be rather busy. After a spring of garden-building, few long-term visits, a short movie that was shot about Puyuelo, donkeys and cows invading the village, and a handful of kittens being born, we put on our yellow helmets, oiled our Spargel-Tarzan chests and dove back into the construction sites.

The first thing we realized is that it takes time to turn back time. The ruins we took on were (of course) filled with rubble. In a post-earthquakian fashion, we had to start cleaning out the collapsed roofs and walls of our respective construction sites. A project that was estimated in words like smooth and piece of cake, yet turned out to be more at home in the vocabularian realm of tedious or fucked up. It took us a good 3 weeks and multiple collective Mondays to get all the rotten beams, roof-tiles and tons of earth out, and to deconstruct the remaining walls to a point that we considered safe again.

The whole operation reminded me about a friend of mine in Bolivia, David, whose permaculture project El Vergel is undoubtedly one of the many seeds that turned into Puyuelo. David bumped into an enormous rock on his land, blocking the area where he had planned a garden. He announced officially that whoever helped him to get rid of that rock, would be rewarded a bounty of 200 Bolivianos (more or less 20 dollars). A couple of days later an old man turned up, carrying a small backpack full of dynamite. As he blew the rock into a thousand pieces, all of David’s windows exploded as well, yet since the old man had accomplished his mission, he took the money and left. Oh, if only Spain was a little more savage…

As we finally went into the long awaited construction following destruction, our gardens gathered speed as well. Vegetables of all colors and shapes started pouring in from all corners of the village, and by June we seemed to have reached a point where we could easily cater for something in between 4 and 6 people. The challenge is now to keep that rhythm up as we move into autumn and winter, and different crops take over the gardens.

To say that everything has been smooth and easy would be a lie though. This is not Arcadia, and we are not all saints. After all this good news, there might even be suspicion on your side, if not downright anger at our constant repetition of how blue the sky is and how beautiful the mountains are. And those worries are justified. Yes, Puyuelo is an idyllic village full of happies (not hippies). Yes, the sky is blue and the sun is yellow. Yes, we bathe naked in the river and we build our house with mud. Yet even Adam and Eve had to shit, and so also the garden of Eden had its little, down-right dull, human mishaps. Remember the hassle with the apple and the snake?

On the 25th of May, blood flowed through the streets of Puyuelo. The sky was blue and the grass was green, and we were all happy with our new inhabitants, five chickens and a cock. Their arrival constituted the final blow to Puyuelo’s gender imbalance. Counting the cats and Ara, Puyuelo’s male population found itself now even slightly in the minority. Fortunately, the cock’s blatant masculinity made up for our losses. His feathers were giant, vulture-like, and his fierce beak and anger-filled eyes left even the foxes at a loss.

But the PM primavera heat smelled like trouble, and at the first moment of inattentiveness from yours truly, Ara jumped into the forest and mortally wounded (now late) Señor Werner Herzcock. The sky remained blue and the sun yellow, but the grass was now a red-speckled green; a silent reminder of our first country-side drama. A drama that marked the beginning of a long-lasting Puyuelian debate concerning the primordial question “do chickens need a cock?” (a debate that, as you can imagine, spills over into broader, social areas. Thus far we have not found a definite answer, yet neither have we seen clear signs of our female flock being at a similar existential loss as we find ourselves in from time to time when we are just the four of us (i.e chickenless).

On the 14th of June, James and me walked to Gere, where our neighbor Fran had promised us we could borrow his donkeys. Our imagination was filled with romantic, equine images; carrots-on-sticks, Sancho Panza behind his master. The day was once more pregnant with adventure and learning! On the two hour walk from Gere to Puyuelo, the donkeys behaved marvelously. Contrary to what we expected, they walked so fast that we even had to hurry a bit, and in less than two hours we arrived at the hotel, where we had left our first load of lime bags. We loaded the poor creatures with 40 kilos of lime each, and began the last stretch home. Between the hotel and Puyuelo, the path is often narrow and dangerously close to the edge, with a drop high enough to kill both a donkey and a human being. With the animals now loaded, things turned scarier and James and me had to keep our cool in front of Sarah’s film crew, who had chosen to film us just that day. Yet on the second stretch disaster struck. As the donkeys had to maneuver through the pine trees, one of the lime bags ripped open on a branch, and above the 200 kilograms-stampede that followed the accident, rose a white cloud of this notoriously irritating product. Thus James and me, coughing and with tear-filled eyes, where caught on celluloid calming down the poor animal in an attempt to get the broken bags to safety. Once more, we realized, were we confronted with our lack of experience, as we find out how people survived here for centuries.

But nevertheless. Notwithstanding all the talking and the sorting out and the petty problems (what doesn’t kill you..?), we are still alive and kicking, and Puyuelo hasn’t stopped rising out of its ashes like a Spanish phoenix. Thy shallth take the Fritz-week as thy are supposed to, said the lord, watch the rain and contemplate, before thy finished thine summer-business. And so we obey as the air fills with the smell of rain for the first time in two months…

A warm hug from Puyuelo and its by now semi-adopted children,