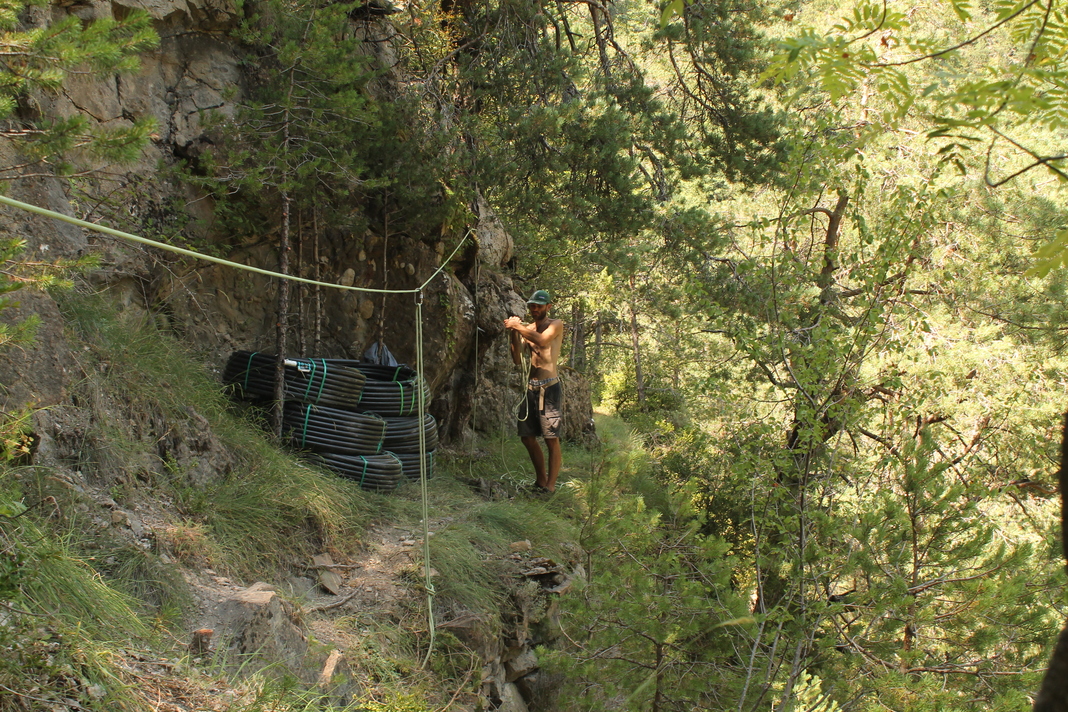 So. So. As usual here in Puyuelo, we soon fell off the calendar and the map, into the timeless and placeless reality we know this place easily becomes. Before we even realized, July slipped through our fingers, taking away a couple of shades of green, and leaving us in an ever-more yellow scenery. Grass turns into hay; flowers into seeds and our skin into leather. Every day we understand the local saying ‘9 meses de invierno, tres de infierno’ (9 months of winter, 3 months of hell) a little better. This is the Spanish summer: merciless, yet at the same time wonderful when one respects the local time frame. The outside becomes a big inside: every piece of shadow is a roof, every plot of grass an afternoon bed and every river a refreshing bath tub.

The least one could say is that we haven’t been bored so far. A week ago, we spent three days installing the water system. Although we knew that would be a big project, we – as usual – underestimated it. The plastic tubes came in big rolls of 100 meters, weighing about 35 kilos per piece. Carrying them into the monte (the wilderness) turned out to be a huge hassle. The traject was fairly easy to walk, but some cliffs where downright dangerous carrying those plastic monsters, so we had to secure ourselves with ropes. The first two days we came home with broken bones, feet full of blisters and sunburned shoulders, but, as they say in Spanish – sin dolor no hay memoria – without pain there is no memory. And when we finally opened the tap in Puyuelo, we were all satisfied. Tired, but satisfied: what better ground is there for a bottle of Cava to celebrate a successful mission? For the first time in 60 years there is water flowing through Puyuelo. Thousands of liters: every day.

On Monday Don Ramón came by again. When we showed him our work, he walked to the end of the pipe, formed a small cup with his trembling hands and tasted. Unbelievable, he said, water in Puyuelo, and as the corners of his eyes grew moist, the importance of our work hit us. From now on, Puyuelo will really flourish again. After sixty years of dust, weeds and destruction, we dedicate ourselves to commemorating the people that have lived here for centuries; to turn what had been banned to the history books into a real village again.

The next weeks we will be working on a couple of dozens projects at the same time. The vegetable garden, cleaning out, building a shower, an oven and of course the reconstruction of our first house. Yesterday, Felix and James went to the neighboring village of San Felices, where help was needed for the reconstruction of a big roof. All in all, twenty people from different villages in the valley showed up, and most of them will also take time to come and help us over the next weeks. What a wonderful feeling that we are not the only crazy people around here, but that we can fall back on a network of inspiring, skillful people that have been doing the same work for years!

That is that, as the sun goes down behind the high mountains in the West, nothing disturbs the night but the song of crickets, the cry of the occasional owl and the sound of laughter rising up above our base camp. Somewhere on this little hill four boys retreat to their hammocks, hoping some of the magic they found here rises out of this words and finds its way to you.

A big hug from all of us,